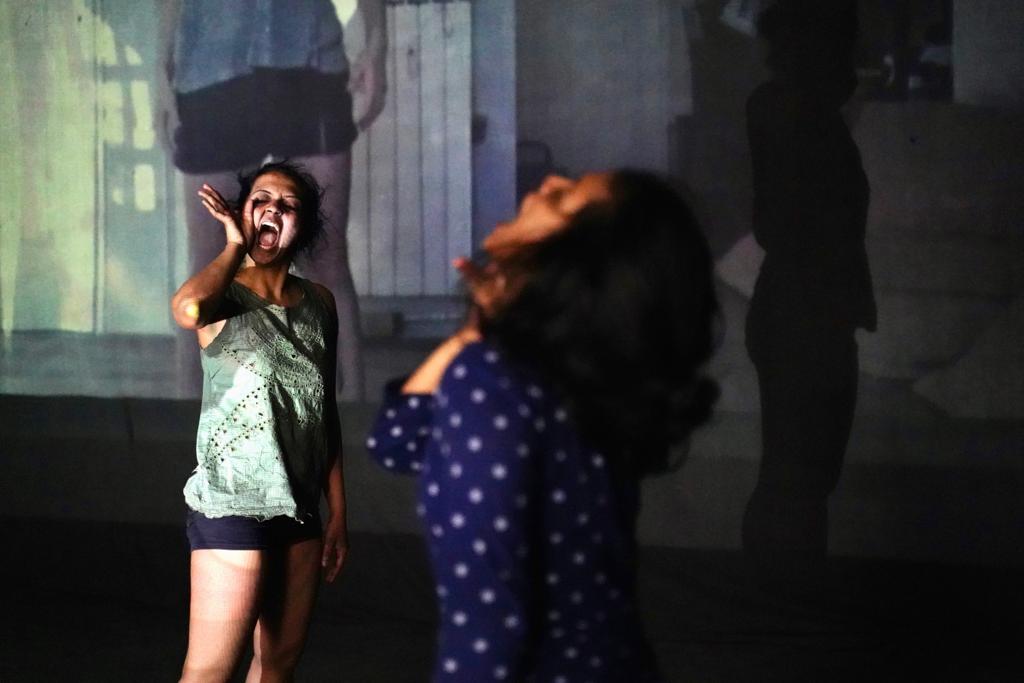 “This morning I woke up, cut my hair, danced with the trimmed hair flying open all as a matter of factly without realising what it might mean to do something like this, or BE this person in another setup or another country. The familiarity and the mundane-ness of our privilege is so hidden that it’s nearly impossible to know what you have until one day you don’t. The gaze on the feminine is stronger than ever, the scrutiny is inhuman. Whether it is our right to cover our head, or uncover it, the laws around what a female body should or should not do and the mandates that are dictated for the script of the feminine are outrageous.” – Aditi Venkateshwaran, Performer/ Artistic Director IAPAR.

Although this performance wasn’t directly meant to be a protest, it is our small attempt to show our absolute and unwavering solidarity for the protests, for reclaiming our right to exist, and to exercise the will and choice to do so in whatever way we please. Performance was, is and will always remain a powerful tool to protest, and we continue to remain inspired by the immensely powerful acts of resistance taking place on the streets of Iran, and by those that have been demonstrated across the world in moments of relevance.

“In light of the protests happening against the killing of Mahsa Amini (Zhina Amini), where women have been marching out on the streets of Iran, defiantly opening and cutting their hair in public and dancing and demanding that their oppressive ruler be removed from power, I think our performance We Dance Ourselves (an adaptation of ‘Rosas Danst Rosas’ by Anne Teresa de Keersmaeker) last weekend happened at a very crucial time, where our hair flying unabashed and free was observed to be as important an element as the rest of our movements – as a member of the audience put it, “your hair seemed to have a personality of its own”. It is incredible to think that this performance would perhaps have been banned in Iran today, perhaps with hefty fines, arrests, or fatal consequences for its performers? And is the situation very different in our country? In 2022, we are still fighting for our right to be the way we want to be, to make the choices we want to make.” – Tanvi Hegade, Performer / Writer / Dance Movement Therapist.

Before the pandemic Aditi and Tanvi were both a part of the Indian Adaptation of the Chilean Anti Rape Song Protests in Mumbai and in Pune. On the 26th of January 2020, they performed the Hindustani version of the Chilean Anti-Rape Song – translated in Hindi by Sapan Saran, something that some of us have been deeply moved and inspired by. Based on the work of Rita Segato, the piece was created by the Valparaiso Feminist Collective called Las Tesis. It was performed at the International Day of Elemination of violence against women on the 25th November 2019 and has been performed all over the world since.

The Mumbai performances happened on 22nd January in Andheri and Versova and another one on the 26th January at the Juhu Beach. In Pune it was performed on the 26th January outside TIFA Working Studios and Jyotsna Bhole Sabhagruh in the evening. Everyone in both the teams have come from different walks of lives, professionals, students, homemakers aged 16-81 were a part of this. The movement that was initiated in Mumbai by Anat Speaks and Studio Tamasha is supported in Pune by organisations like IAPAR, TIFA, many many friends and loved ones.

“I’ve always struggled to express my political and social discourse. But my art then becomes my healing, for me and for many like me who go to it to find meaning in the chaos.

In November 2020, we started the creation of the work “Constant Acts of Disobeying” which was another way to voice and question the gender narrative and the burdens that are attached to it. We’ve performed over five shows of this production and there’s so much yet to be done with it. Understanding the new and questioning the old. Women and Men who break the rules, who disobey, yet hold each other through!”, says Aditi.

These and several other performances talk of every woman, every man’s journey into empowering many more along with their own selves. They talk about everyone who’s had to shout to be heard. They talk of the exhaustion and the little successes along the way. Coz it’s all justified when you think of our future children, those who may not be born to us, but those who we live for and those we leave behind.

There is more than one way to voice support and to protest. Because most of the time, solidarity is shown through simple acts of kindness, through smaller moments of consideration, through art. These are difficult times, confusing times, and the only thing that’ll keep us all sane is having each other’s back and not spreading more hate than there already is.

Through anxiety and panic, let’s all hold each other close, let’s listen, observe, educate ourselves and take turns to protest our unrest. Because in the end – “In diversity we evolve”. May our collective light shine sharp, bright and blindingly on oppression, bigotry and fanaticism. And continue to dance ourselves, we shall.

Contributors to the blog – Tanvi Hegade and Aditi Venkateshwaran.

Some more performances in protest for justice for #mahsaamini